I was on a conference call last night using Bluejeans, and there was quite a bit of confusion about where all the people on the call could find various shared files and comments. There was the Slack group, which confusingly has multiple channels so if you're looking for something you sort of have to check them all and manually scan; there's no way to emphasize the priority of anything, or to post a static file. There's the bluejeans chat for that particular call itself. There is the Google docs, where you have been given access to various docs but there isn't really a place to go to feel you're seeing everything.

I have a long-term thesis that there is a wide need for a product that would unite long-term information and short-term information in one place, that would essentially have transient chat elements like Slack, twitter, yammer, Facebook, Google and Yahoo groups, medium-term curation elements like Reddit and hacker news, and long-term writing and curation elements like Wikipedia. If Wikipedia is the place you go to find out " what's the eternally true back story of X", and Facebook/Google groups are places you go for "what's everything the X group is saying", and reddit is the place you go for "what are some interesting links and comments related to X" this would be the place you go to find out "what's the current deal with X".  Sort of a crowd sourced, moderator-curated Techmeme for any topic or group.

What's the current deal with our school's PTA: when the heck are the meetings, who is even leading it, what's the upcoming event schedule, where is help needed, where's the contact list, where's that permission form again, how can I find that awesome short documentary film one of the school's dads made about the school last year?

What's the current deal with sci-fi movies and TV: what's out in theaters that's good? what has just come out on streaming? what's been available for a while that's hot and much liked? what's the deal with that fake seeming Star Wars preview… was that good? isn't there like an aliens movie in the works or something?

What's the current deal with the New York mayoral race: are there any Democrats running against de Blasio, are there any prominent Republicans planning to run, even what year does it take place, what are the top issues voters have reported caring about, what's the status of the city's promise to stand up to Trump?

What's the current deal with the NBA: what are the team rankings and what direction are the teams going, how has boogie cousins shaped up in New Orleans so far, how bad is Durant's injury and what does it mean for the West, who has emerged as a new superstar this year, what are the Vegas odds on teams winning the championship? Are there any good bball podcasts and episodes? wasn't there like a fight the other night? who has clinched playoff berths?

What's the deal with the workshop I just took? Who was in it, where are the slides, what outside resources were mentioned but not explicitly provided?

What's the current deal with Nintendo Switch: the games that are out and their reviews, the sales versus expectations, the best twitch streamers, the most shared videos so far, the articles about it people have shared the most even if they're a week old?

Right now, if you wanted to be able to know these things at a glance on one page, at a moment's notice, you would have to hire a full-time employee to curate information for you and assemble live pages of it; the way you would need to do that for background information on significant topics before Wikipedia. And yet we have seen again and again that this sort of summarization, categorization and curation work is in ample supply on the Internet.

Now of course, there would have to be enough attracting people to camp out on a page and work on keeping it current. Since a much wider range of topics would be eligible then Wikipedia covers, you can imagine that there would be a significantly smaller amount of curation energy per page. On the other hand, isn't the page on the current status of iOS or the Trailblazers or space exploration or feminism a way, way bigger deal than their Wikipedia pages?

On the other other hand, since these wouldn't be places for original comments chatter, it's hard to see how they could grow a community the way, say, reddit does.

Say I want to see what's going on with the Trump-Russia stuff. Where do I look? None of these seem to be giving me what I want: 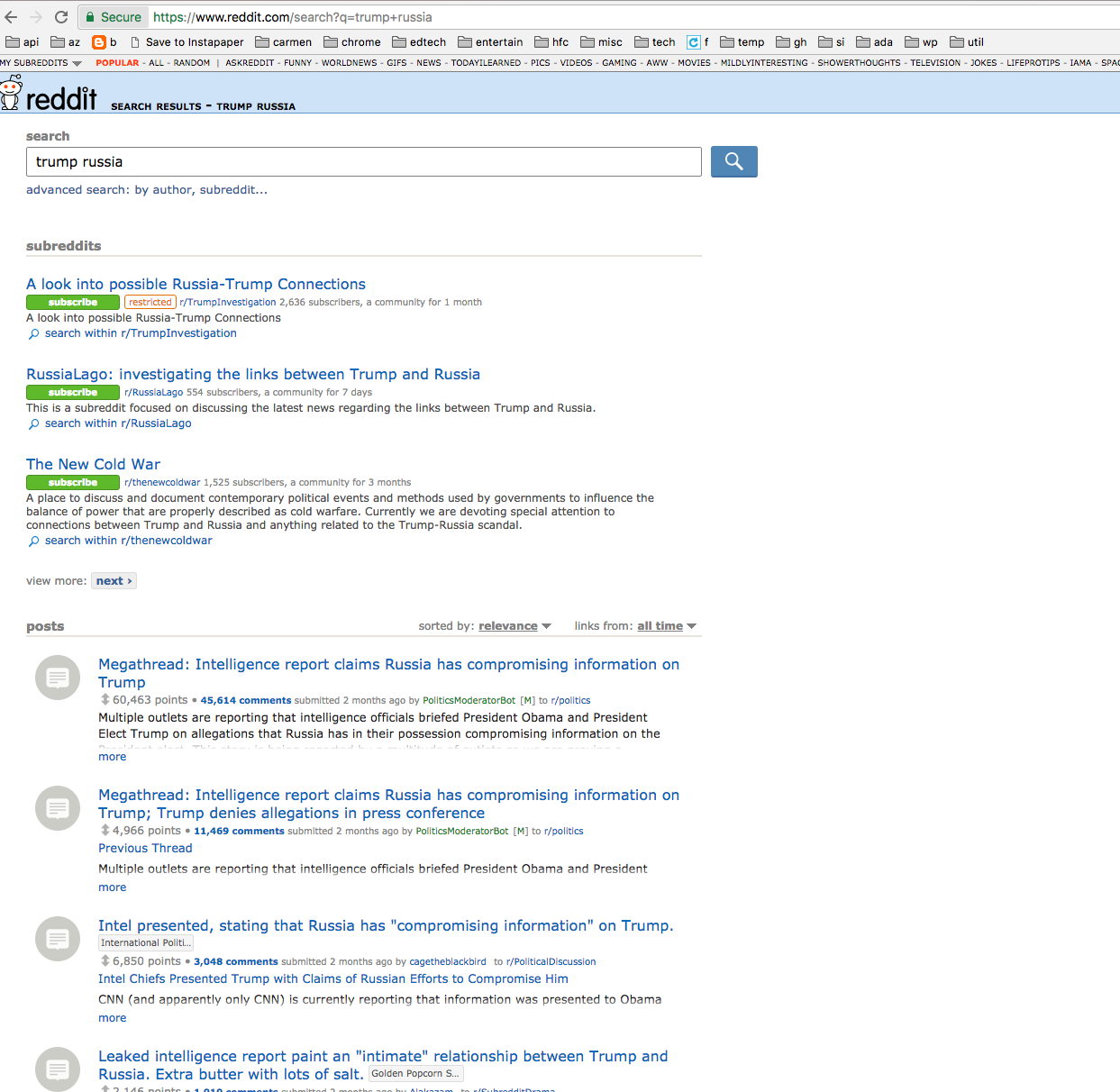 "Hey, FB, what's up with the Trump-Russia stuff?" 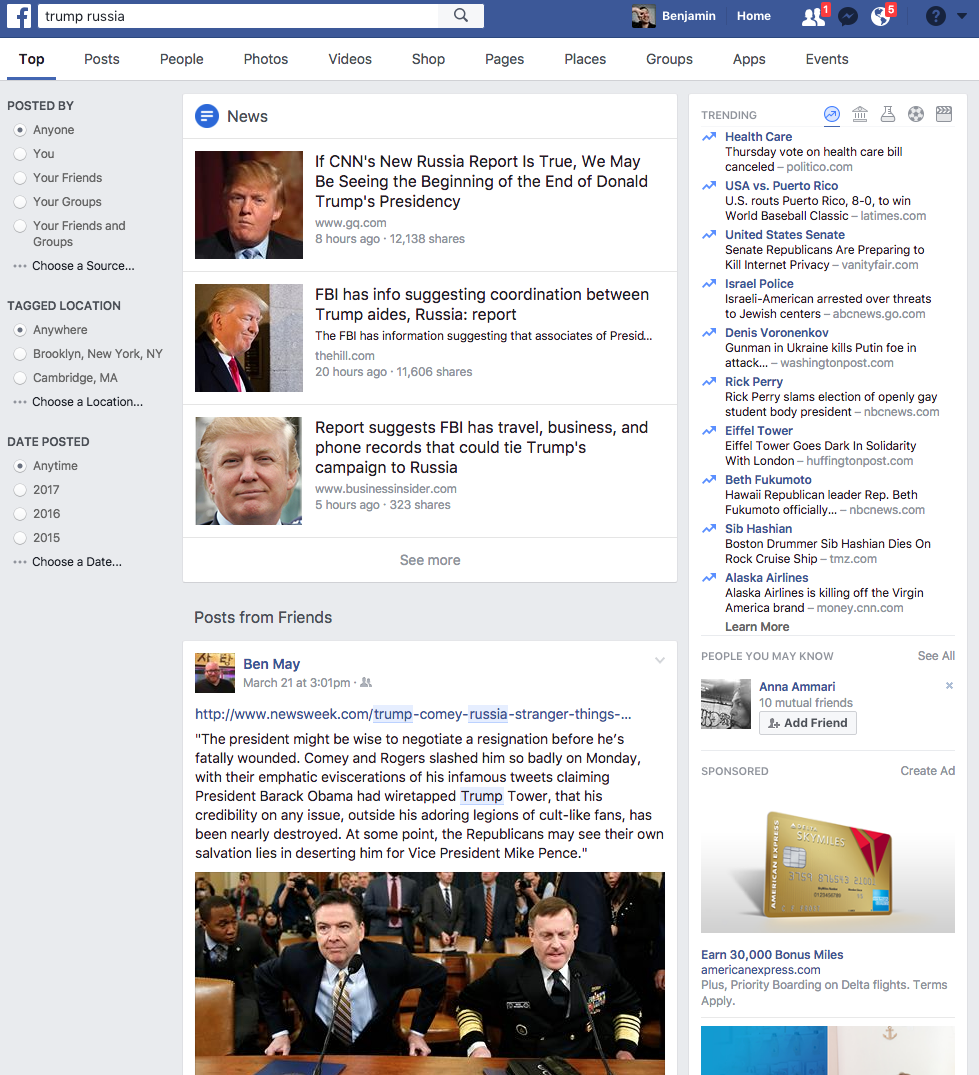 "Hey, Google, what's up with the Trump-Russia stuff?"

This is the best result currently, though it's very "latest story"-focused, rather than "what's the current status"-focused. I'd like to see poll numbers here, pullquotes from prominent players, capsule bios, etc. Note that none of the results are static pages devoted to the core topic. 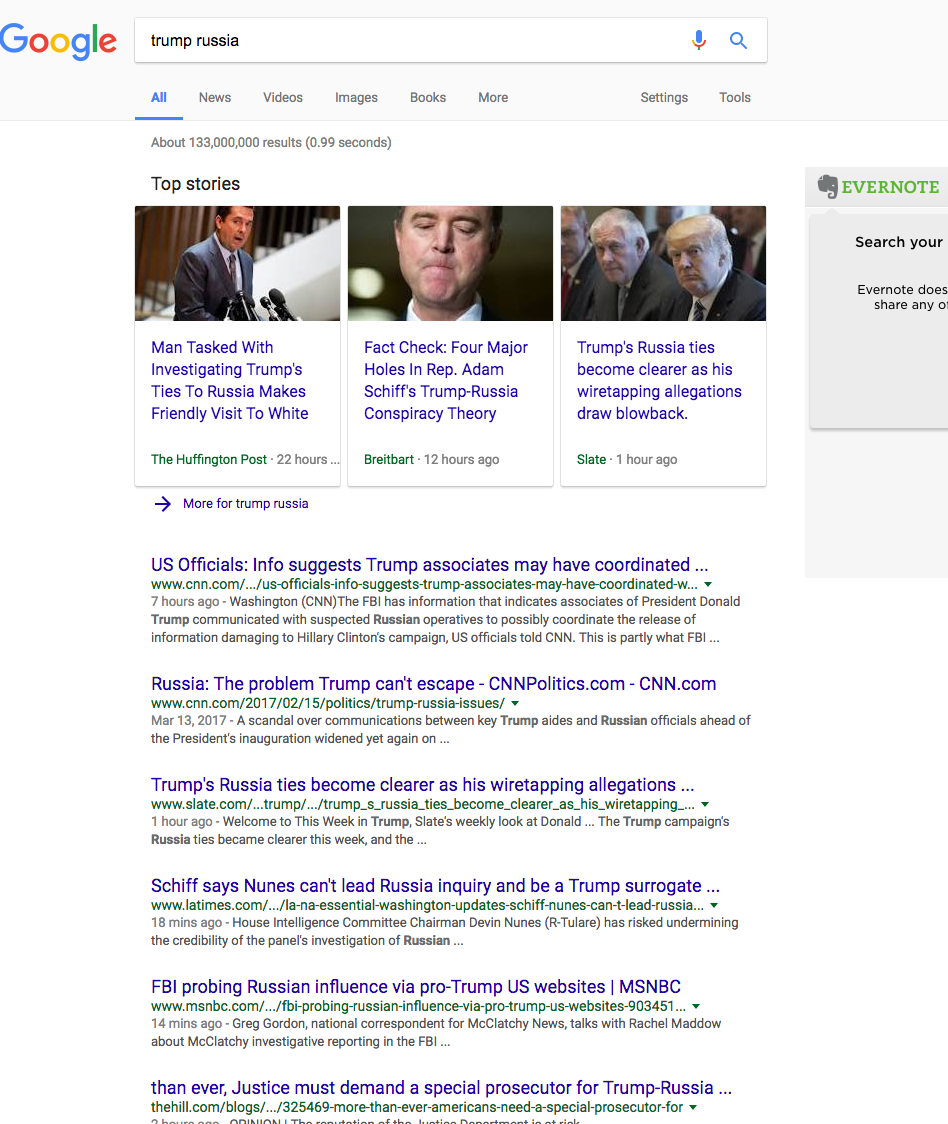 ...Google News is essentially the same as regular Google search, but even more overwhelming. Get me an intern! 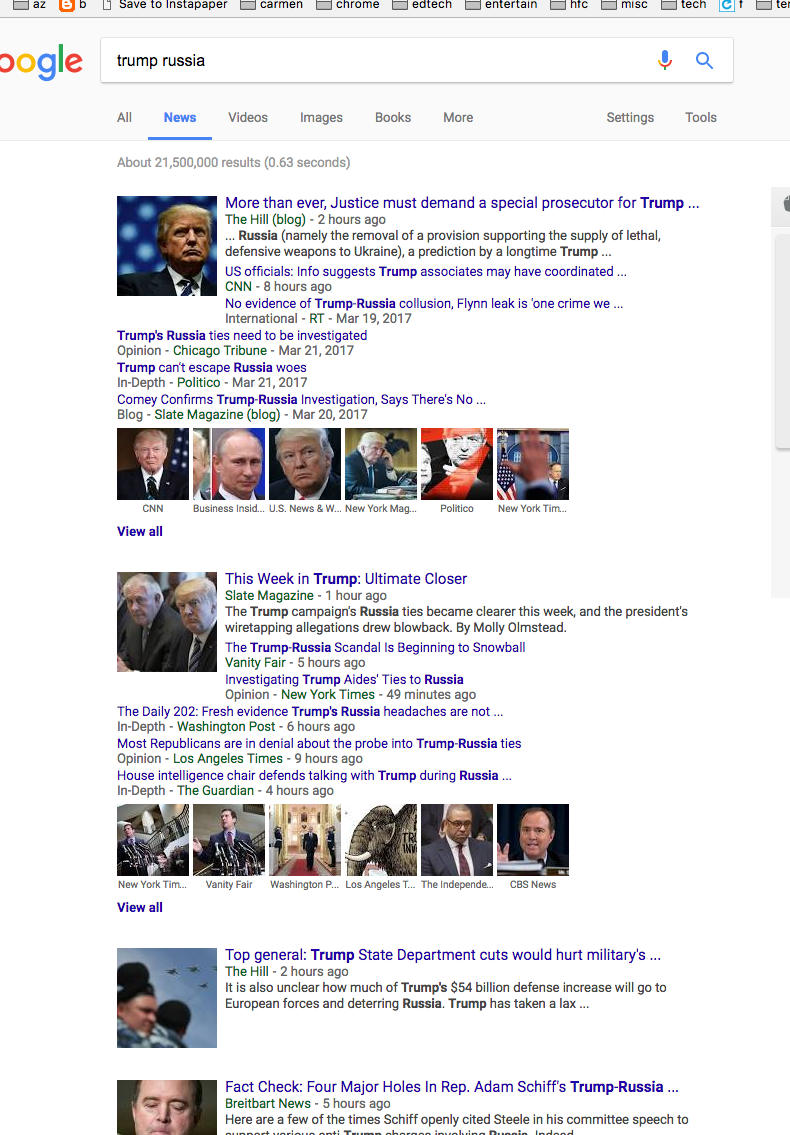 NYTimes results are particularly poor. Don't they have some kind of explainer they could point us to? 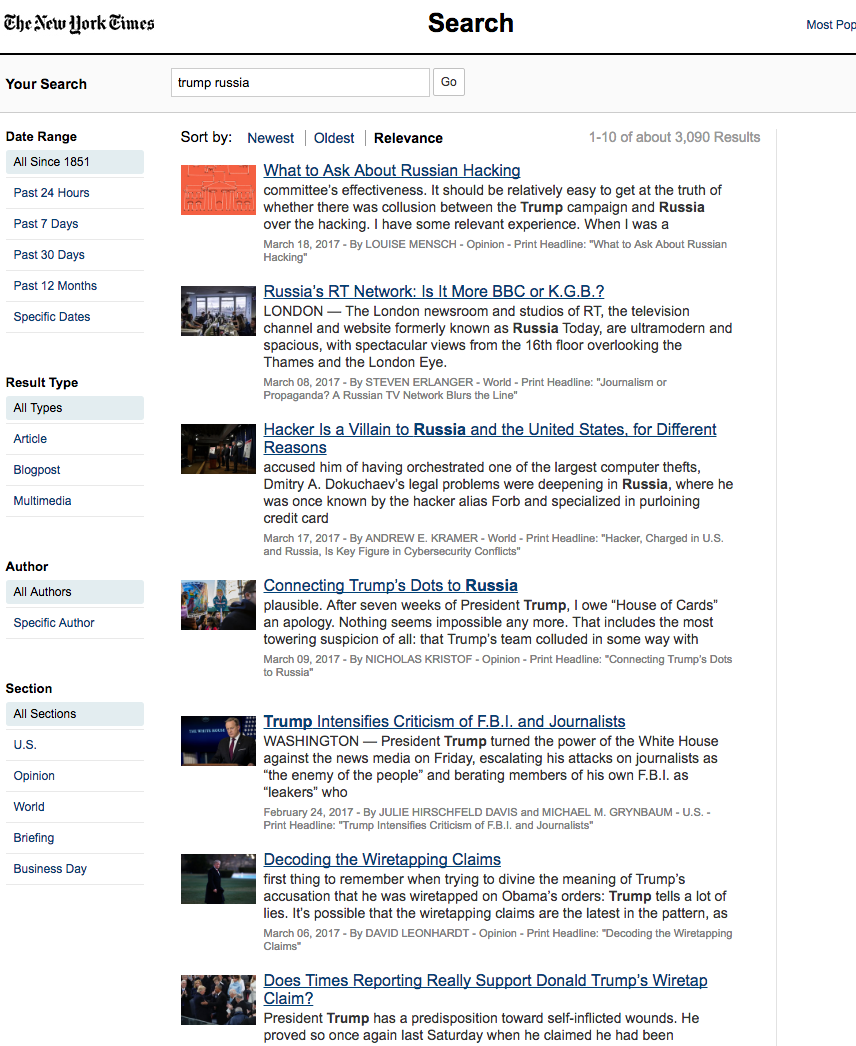 …and first result, an op/ed by a not very trustworthy person, with little info made prominent: 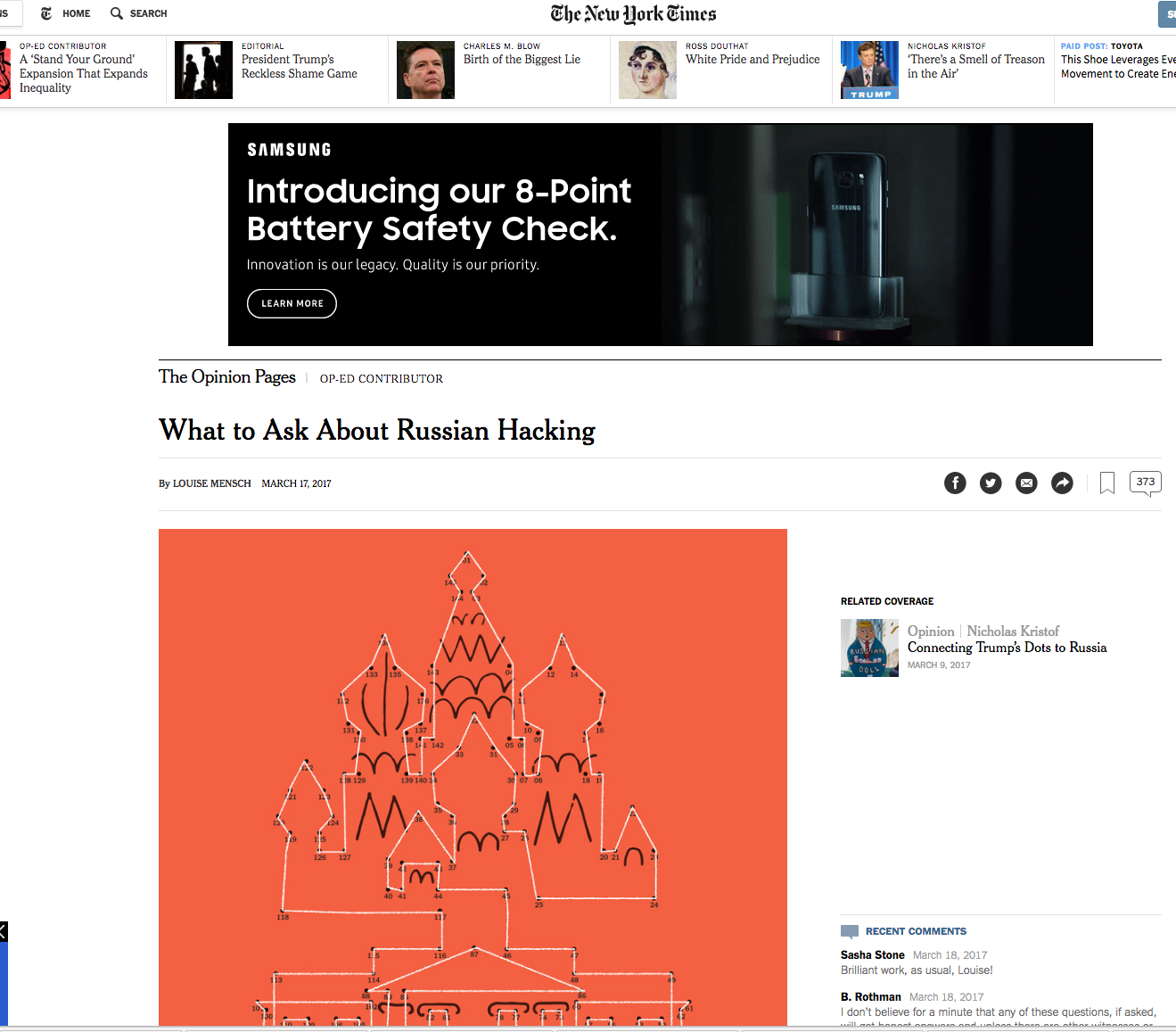 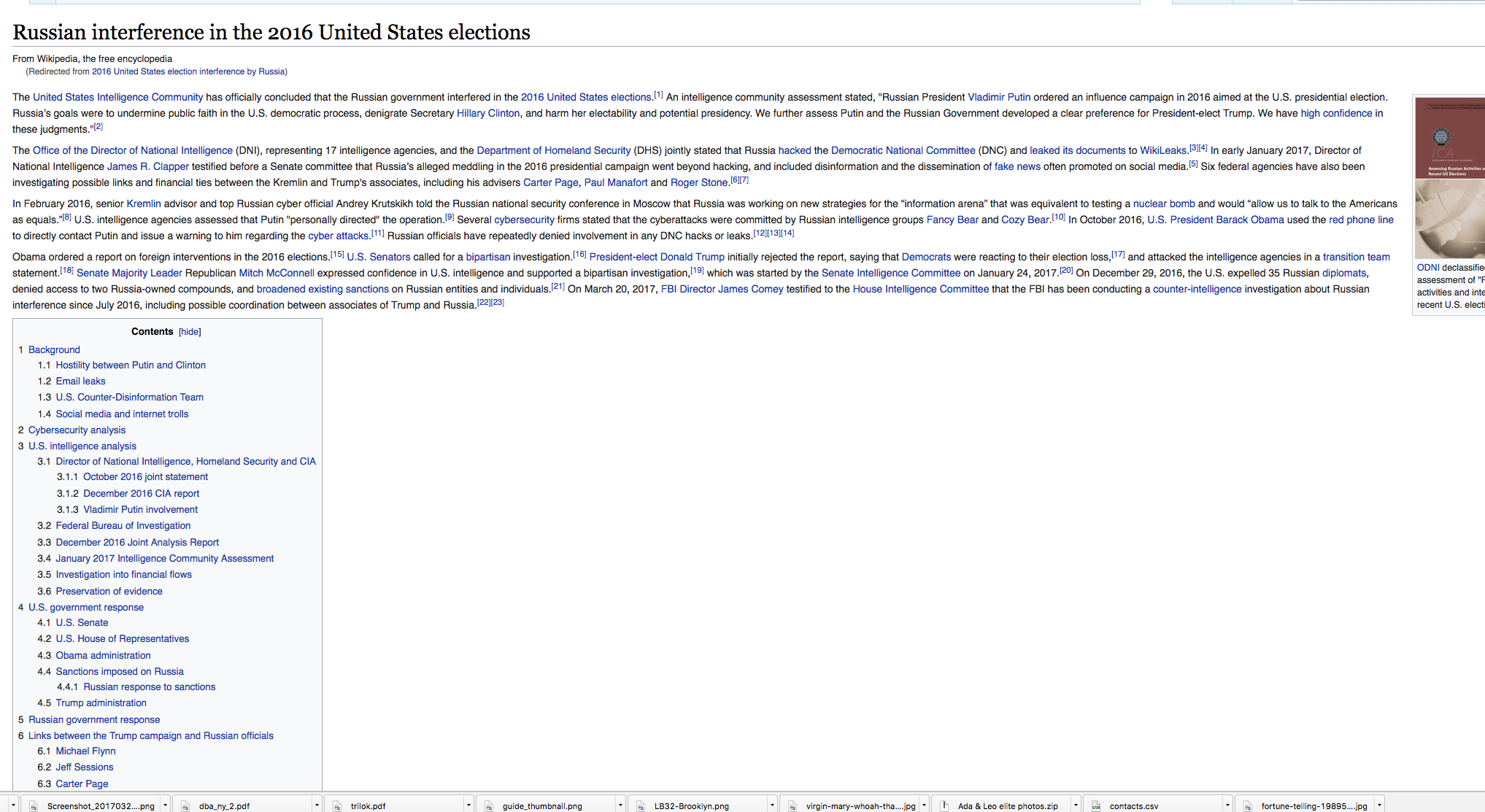 One more topic: the "Sully" miracle on the hudson landing. 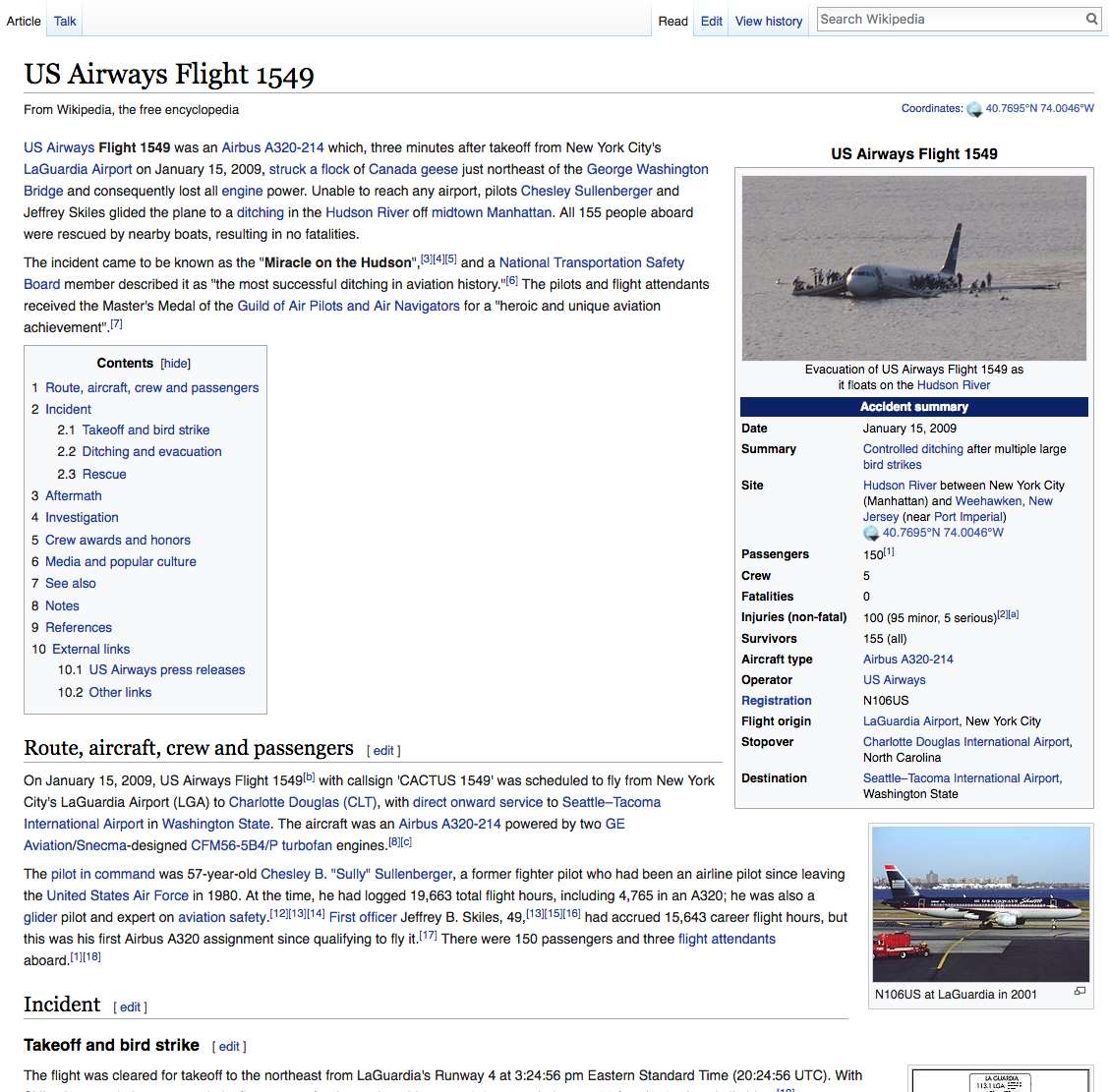 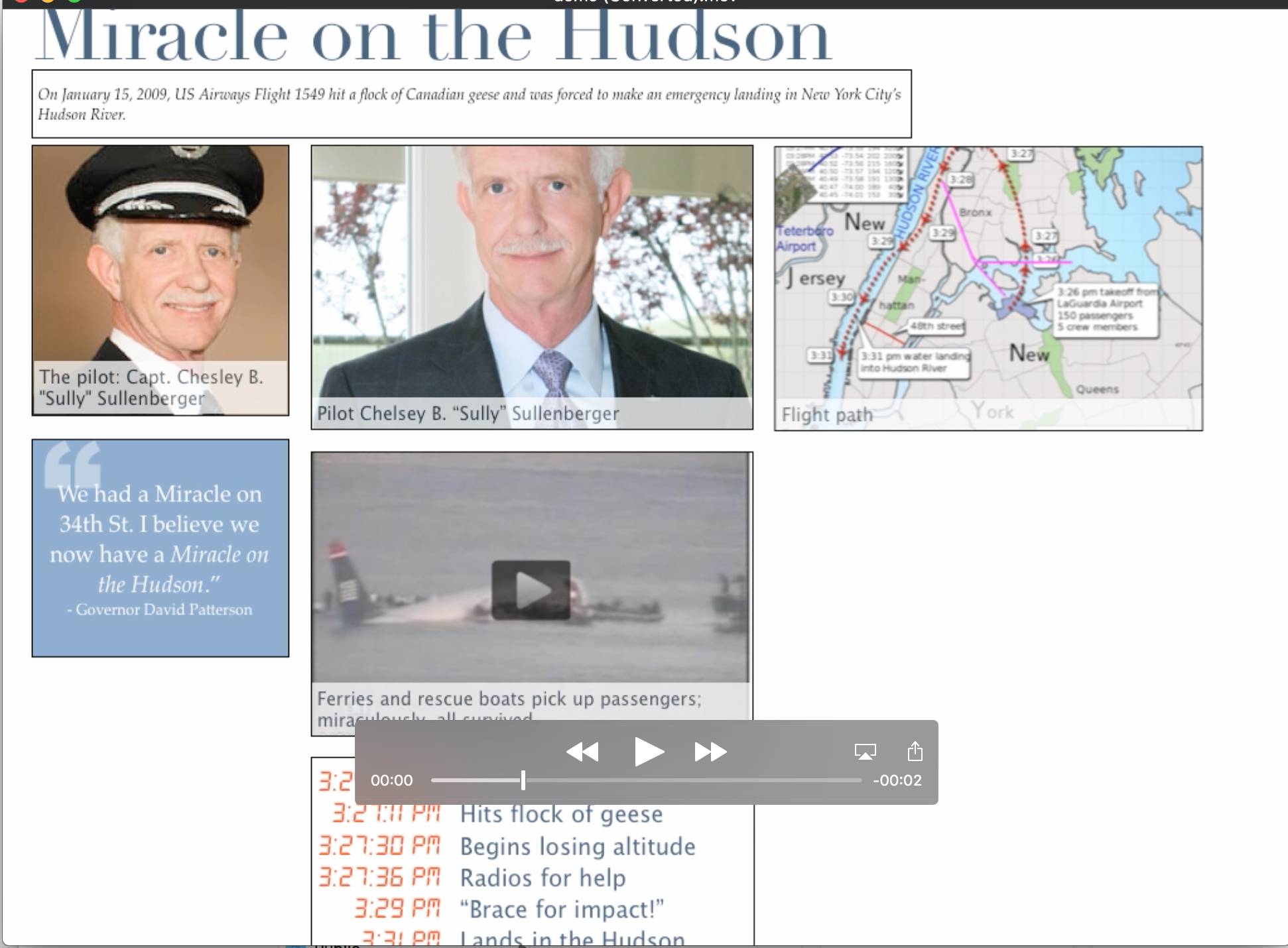