I was searching for analysis of Assata Shakur's guilt or innocence (watching the film 13th, I was reminded of how interesting and disputed her history is), and I came across this disturbing search result: 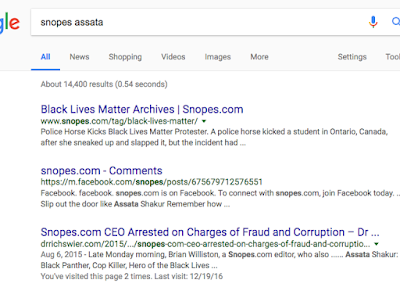 This takes you to this completely false and slanderous story, which I immediately suspected was biased, but which I didn't realize at first was totally made up: 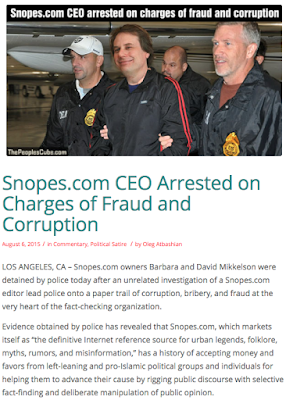 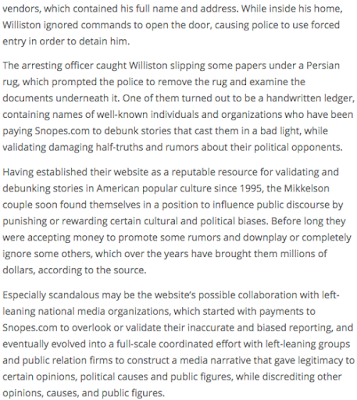 I think it's clear that this article is something its author wanted to both seem true and to raise, and echo, suspicions that Snopes is being systematically unfair to right-wingers when it calls their theories false. In that sense, it is a meta-lie: a knowing lie which attempts to perpetuate an alternate reality of truth in which other knowing lies are validated, and shame for spreading them is absolved.

One theory I have is that in a story like this, a sprinkle of absurdism serves to provide an out for people accused of spreading lies. The story has it that when an antique player piano started playing "Dixie", the Snopes editor:

...became violent. He started grabbing various antique objects from the vendors’ tables and throwing them at the antique piano in an attempt to silence the music.

That's just absurd enough so that you can roll your eyes at someone who believed it--but not so absurd that it's obviously untrue, a balance that I think is a carefully calibrated.

Contrast this with the staid passages that pretend to reveal information which pierces Snopes's veneer of independence and fairness:

The list of groups and individuals paying to use the website’s clout ranged from local politicians to transnational entities to foreign governments, including Russia, Cuba, Venezuela, Zimbabwe, Saudi Arabia, Qatar, and the Palestinian Authority. None of the specifics or individual names are being revealed while the investigation is still ongoing...

This is a brilliant gambit, from a propaganda standpoint, in part because these passages are so quotable out of context. And the story itself, even if more than one paragraph is read, seems designed to make a significant percentage of people not realize at all that it's fake. The original story carries no disclaimer at all, and even the republished story I found saves the only disclaimer--the single word "satire"--for a separate section at the end of the column. (The story is tagged at the top in tiny print first as "Commentary", and secondarily as "Political Satire".)

More analysis of this fake story, including the source of the Photoshopped image, here.