School as bricolage: a response to Matt Candler's "OS" proposal

At the 4.0 Schools community conference in New Orleans last week, 4.0 founder Matt Candler gave a presentation where he articulated a vision of schools of all shapes and sizes--from traditional schools to homeschoolers to afterschools to micro-schools--that would form their curricular, pedagogical and administrative tools by assembling sets of modular components from a common ocean of options.

He called this a sort of "OS", or operating system; at other points he referred to it as a common "fabric". It was a rough vision, far from worked out in its details or terminology, but that's part of what makes it exciting.

Discussing the proposal with another attendee afterwards, I realized that we had interpreted the proposal differently. He heard "OS" as indicating a technological system or structure, which I didn't, at least not completely.

A similar category of concept might be design thinking. There is certainly design thinking software, but you absolutely don't need it to do design thinking; it's an approach, which comes with certain common activities and core concepts, in different variations as appropriate.

I know the term "bricolage" already refers to a specific school (Bricolage Academy in New Orleans, not to be confused with Amon Tobin's excellent album or the restaurant in Park Slope, Brooklyn), but that seems like the best word I can think of to encapsulate my understanding of the operating system metaphor, or at least what popped up in my imagination when listening to Matt's presentation!

It's the idea of systematically borrowing and adapting many different learning modules that seems like the key, and bricolage captures this idea of collecting and remixing whatever is useful.

As with other large concepts in systems organization, it can be underwhelming to hear it articulated as a grand vision. I often hear articulations like this and think, isn't this something that every decent system already does to some extent?

But I think translating an idea from a low-priority ingredient to the main course can have unexpected added value, because doing so changes its role qualitatively, not just quantitatively. The added value is in the dynamic effects you get by adapting the concept more centrally, more aggressively and more strategically then you would if it wasn't a core concept to your organization. With that deeper role, it can encourage and bring along all sorts of related shifts.

One side effect or dynamic effect for this operating system bricolage, in my mind, is the broader model of learning and growth it provides for students and other participants in the system. The process of exploring, selecting and adapting learning modules is one that presupposes and reinforces a particular belief about knowledge: that it grows out of our being a multivocal community with a complex landscape of valuable ideas, rather than a monolithic set of knowledge to be delivered and absorbed. To fully embrace this nature of the operating system/bricolage model seems like a natural progression to involve students in the selection and adaptation process itself, as both observers and decision makers.

Cheating on my Android

I've used Android phones since the original LG G1, with its slide-out physical keyboard and trackball, came out in 2007 or so. I've never liked the tight lock Apple keeps on the iPhone/Pad/Pod systems, the stories of plugging the phone into your Mac deleting your music library, the inability to use the filesystem, the absence of functionality due to the limited API.


But I've had 8 Android phones in 8 years; each has seemed fast at first, but became sluggish after only a year or so. The bugs and crashes have been legion. And even when the phones have been more or less working, they've always been a bit laggy.


The latest series of dropped calls, freeze-ups during work meetings, and general brickiness from my beloved, 2 year-old Moto X has made me finally, finally try using an iPhone as my actual phone. I have a 3 year-old iPhone 5 I use for app development, which makes for an apples-to-apples comparison. Thanks to the magic of the SIM card, switching phones took a paperclip and 30 seconds.

Here's what I've noticed in a month of use:

Even at 3 years old, running an OS three major releases past what it was designed to handle, the iPhone 5 usually responds smoothly to input. The keyboards lag here and there, and it struggles at times with the app-switcher's blur effects, but it stays punchy. (Even my 1st generation iPad feels responsive, after a good 7 years!)


I had a battery issue with the iPhone (hey, it's 3 years old) and was able to talk to a helpful human at Apple in minutes. (And when the call dropped, they called me back!) Google is an impenetrable fortress of indifference.


I almost didn't try the iPhone at all because iOS 9 broke app updating for me; all the apps with updates entered a bizarre state of limbo. It seems like deleting everything and restoring has fixed this. Meanwhile, my Android, like everyone else with an Android phone more than a year old, has been choking on Lollipop (version 5), let alone Marshmallow (6). Several Google-owned apps crashed just while I was writing this!


I can't say I see much difference here. I notice fewer dropped calls on the iPhone, but there are plenty of those, as well as delightful system crashes and reboots in the middle of Google Hangouts with clients.


Holy cats, do I miss widgets. I don't mean that "Today drawer" silliness, I mean real desktop widgets that can be instantly scrolled and browsed. Where you can jump directly to some functionality without having to open the app and browse to the right option. Where you can like see today's calendar events on your phone's homescreen instead of just a bunch of folders, and save your forgetful ass. 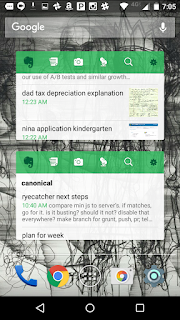 
It's great that the iPhone has had third-party keyboards for a while now; a swipe-style keyboard I can use to spare my thumbs is an absolute must for me, since too much typing of any sort gives me pain. But these keyboards are clearly second-class. They aren't able to embed a voice recognition button, and even the best of them, like SwiftKey, don't match the UX quality of their Android counterparts.


Apple has been closing this gap, but I still prefer many little things about Android's approach--especially the little navbar icons and the ability to clear all notifications, so new ones will stand out. Many Android notifications also appear in the drawer but never announce themselves in the banner style typical on iOS, so I don't mind having them on (whereas on iOS, I must aggressively deny notification permissions). 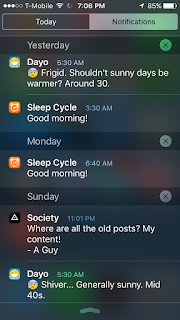 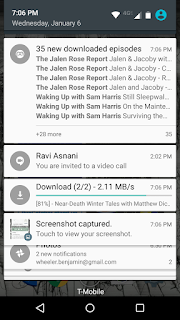 
Speaking of Material Design... compare the settings screens of stock Android to iPhone. Android's card-style visual metaphor feels crisp and current; iPhone's just feels old-fashioned. This carries over into lots of the apps. OverCast, one of the most popular iPhone podcast apps, feels like a website from 10 years ago. There's something about the lack of pixel-perfect design in Android's history that has let it avoid a certain kind of overly fussy elegance. 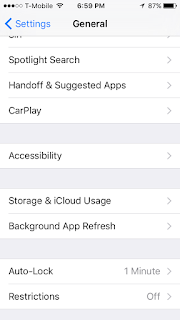 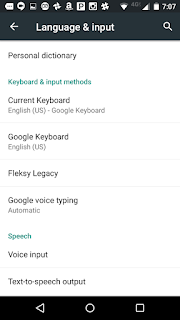 
The iPhone's design paradigm is less busy than Android's, both visually and in terms of functionality. A few Android apps are moving in Material Design's minimalist direction, but there are still ellipsis menus everywhere with tons of options. iPhone's core apps, and Google's iPhone apps, are much more spare and option-free. This power user misses the power.


iPhone app folders are fine, but they're hard to grok at a glance because they all look the same. On Android, you can see at a glance what kind of apps live there. 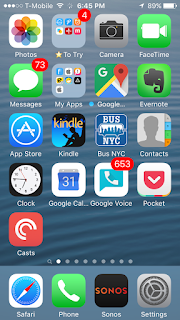 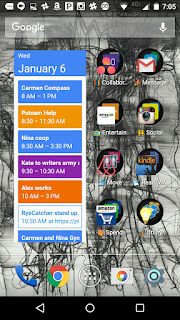 
So am I a convert? More of a casual flirt. I love the reliability of the iPhone. I'd pick a 3 year-old iPhone over a 3 year-old Android phone in a heartbeat. But brand new? Apple's perfect obelisk can't beat the flexibility of Android and its more accepting ecosystem for ambitious developers and their crazy ideas.