Marital fidelity and other fictions

The NY Times ran a profile this week of Carole Mallory, a longtime mistress of Norman Mailer who has just published a memoir. It is full of juicy quotes.

Mailer's seductive line was, according to her, "Take off your panties, I want to experience your soul." She compares herself to Françoise Gilot, the longtime mistress of Pablo Picasso, and argues that she was an artistic and professional force in Mailer's life. On the cheating, with her and plenty of others, she says "Love his acceptance, and I accepted him as a philanderer."

And on Mailer's widow, Ms. Mallory writes that he said "It's not hard to fool someone who loves you and trust you."

Another recent article, which ran on the cover of New York Magazine with the headline "The Half-Hooker Economy", dove deep into the topic of famous and powerful men and their infidelities. It follows a nightclub hostess who was so good at steering trustable women to Tiger Woods's table, probably including herself, that he wrote in an e-mail to her, “I finally found someone I connect with, someone I have never found like this. Not even at home... Fuck. Why didn’t we find each other years ago. We wouldn’t be having this conversation.”

A few more loosely connected points: for years, my wife Kate and I have been giving out copies of a favorite book, Advice To a Young Wife from an Old Mistress. And one of the greatest musical treatments of the topic, this from the wife's point of view, has to be Nina Simone's "The Other Woman".

Finally, not on the topic of infidelity but rather on what makes marriages -- including ones we deeply do not understand -- work, see this NY Times comparison of passages from Laura Bush's recent real memoir to Curtis Sittenfeld's fictional Laura Bush memoir, American Wife: 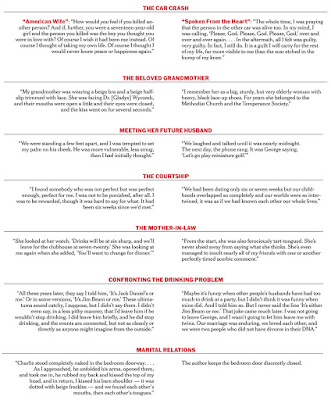