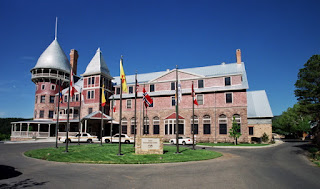 Weird coincidence: how many times can Armand Hammer show up in the New York Times in 48 hours? There he is in articles about two of my favorite--but unrelated--things (which have little to do with the man except for his money): eighteenth-century print culture and New Mexico. Ricky Jay's exhibition of eighteenth-century print ephemera will show for one day only (November 25) at the UCLA Armand Hammer art museum (here's a note on the oil tycoon's rules for the museum, which have been relaxed recently). I thought immediately of the Armand Hammer United World College of the American West in Las Vegas, New Mexico... which was one of the features in the Escapes section in today's paper!

Las Vegas, New Mexico is one of my favorite places: it's an old Victorian town in the north-central part of the state, and the buildings are absolutely beautiful. There are a couple of amazing New Mexican restaurants on the plaza--I can't remember the names, and the article doesn't mention any food in the area, just buildings.

It's too bad the story doesn't have any photos of the Montezuma Castle on the United World College campus. It's an amazing building with a weird history. Here's Wikipedia on the Castle:

The current castle is actually the third on the site, the first two (dating to 1881 and 1885) were the first buildings in New Mexico to have electric lighting, and they both burned down.

The castle was originally constructed by the Atchison, Topeka & Santa Fe Railroad as a luxury hotel, capitalizing on the natural hot springs on the site. ... It operated as a hotel until 1903. It was then briefly owned by the YMCA, then operated as a Baptist college from 1922 until 1930. The Southern Baptist Church sold it to the Catholic Church in 1937, and it was operated as a seminary for Mexican Jesuits until 1972. The building then sat empty for a decade and was subject to significant vandalism and decay. The Jesuits made a little money renting the building out as the set for the low budget horror movie The Evil in 1978.

In 1981, the castle was purchased by industrialist and philanthropist Armand Hammer for use as a United World College. In 1997, it was placed on the list of America's Most Endangered Historic Places by the National Trust for Historic Preservation, along with landmarks like Ellis Island. In 2000 and 2001, the school invested over $12 million restoring the building, and it has won awards as one of the great historical restorations in the United States. It is also the first historic property west of the Mississippi to be designated one of "America's Treasures" by the White House Millennium Council.

I really want to set a novel there around the time The Evil was being filmed there!

You gotta love that Armand Hammer tried to buy the maker of Arm & Hammer baking soda just for kicks, and that following the Jewish tradition that 80 years is a full life, so at 80+13 years you deserve another bar mitzvah, he threw himself a lavish one for his 93rd birthday (but died the night before).