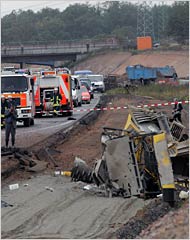 The NY Times reports on the many unexploded bombs in Germany, still waiting for victims 60 years later:

More than six decades after the end of World War II, Germans still routinely come across unexploded bombs beneath farmers’ fields or city streets. Lately, there has been a skein of such dangerous discoveries, one with deadly consequences.

On Monday morning, a highway worker was killed when his cutting machine struck a World War II bomb beneath a busy autobahn southeast of Frankfurt. The explosion ripped apart the vehicle and damaged several passing cars, wounding four other workers and a motorist.

Also on Monday, a weapons-removal squad defused a 500-pound bomb found next to a highway near Hanover, in the north. The police said it was a British aerial bomb, one of tens of thousands dropped on German roads, factories and cities during Allied bombing raids.

While the four incidents were not related, they reminded people that even though Germans have spent decades digging out rusty munitions, their landscape remains something of a minefield.

“We’ll have enough work to keep us busy for the next 100 to 120 years,” said Sebastian Semmler, the owner of a small company in Bavaria that specializes in defusing and clearing munitions.

Neoconservatives: the world does not sit still and cooperate with grand schemes. Bombs do not agree to seek only deserving victims. Armed soldiers do not become competent implementors of political strategy.

There's been a certain amount of pop sociology in America ... that the Shia can't get along with the Sunni and the Shia in Iraq just want to establish some kind of Islamic fundamentalist regime. There's almost no evidence of that at all. Iraq's always been very secular.

I thought in 2003, and still think, that the preemptive war precedent is not all bad: Iran and North Korea's intransigence notwithstanding, I think it has given pause to dictatorships and encouragement to democratic movements. But it's arrogant, short-sighted and callous to weigh the vague saving of future lives so highly compared to lives today.