So I'm in London for two days to perform, no joke, a secret mission for Hugh Grant. I've been here twice before, but I only now am I doing the kind of aimless wandering necessary to give the city an identity in my mind.

Of course, Foucault, Derrida, Gramsci etc. instruct me that this identity is really my construction and not the city's. For example, I will forever think of London as a great city for antiques, simply because I wandered through a cluster of antiques stores in the Islington area that I found wonderful (but others would find unremarkable).

I spent an hour in "After Noah", an antique shop with the usual stock of bureaus etc. but also scores of vintage toys, including in the basement a ragged old 1940s "Finger Football" which used piano-style keys to lift 20 opposite-facing semicircles on the table to flick the ball towards the goals.

Nearby was a Japanese print shop selling hundreds of 19th century prints by Hokusai and others for as little as £20 (which at the current rate is roughly equivalent to $800). The Japanese students working there showed me several prints by a well-known 18th/19th century print block artist named Yoshitoshi, which were amazingly psychedelic and expensive.

I never knew that London was a beautiful city, with old and new architecture blended nicely. The newer architecture actually isn't awful, for the most part (one exception: the Bradican building, which looks like a Krushchev-era instant concrete housing complex). It looks like they were spared the worldwide architectural nightmare of the '70s and '80s.

There's all sorts of pleasant surprises for someone walking around the city, like carefully decorated (but not numbingly landscaped) seating areas along the Thames, and old stone stairways two feet wide that sneak up the side of London Bridge (whose 19th-century incarnation is, ironically, now sitting in the American southwest). There are countless people on the street everywhere, on the bridges and sidestreets, which I didn't expect--I somehow thought London was more like an extended depopulated financial district.

As for art, I knew the Tate Modern was supposed to be good, but I enjoyed others just as much: the National Gallery, Somerset House, and the Barbican. I didn't know most of the museums are free, Washington DC-style, and that unlike the ostensibly free Met in New York, donations are suggested without any arm-twisting. 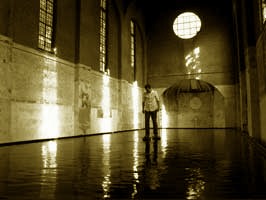 Two things stand out most from my visit. One is a small installation in an old, unused church off Southwark park (which seems to be pronounced like "Suffolk" but with 'th' instead of the 'f's). It's called "Bridge", by a young designer named Michael Gross. He has flooded the church with several feet of water, and his device allows you to walk across it as if suspended by the water's surface. He achieves this by means of a series of circular steps; as you shift your weight onto one, the next emerges. It's entirely mechanical, and still needs work in order to become effortless and discreet, so experiencing it is mostly a matter of braving the buggy steps in hope that you don't fall into the pool, but Gross told me he intends to get the kinks out and deploy it in a natural lake or river in the next few years. The other sight that stands out so far is the British Museum's central atrium, apparently opened in 2000, which is breathtaking. The picture at right can't do justice to the wonder of watching the pattern of triangular glass panes change as you walk around the circular, enclosed reading room at the center of the atrium. The glass panes contrast against the old walls, but somehow it feels successful where I.M. Pei's tacked-on Louvre pyramid doesn't: it brings the sky into the space and keeps the focus on the atrium as a whole.

I went to the British Museum thrice during my four months in London. The central courtyard is otherworldly–I felt like I was inside the Death Star.