Don't blame me, I voted for Bartlett 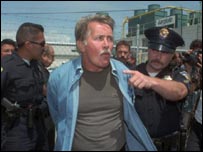 A NY Times profile of Martin Sheen reveals some things I didn't know:

At 65, [Martin Sheen] has decided to make good on a promise he made to himself long ago: to enroll, for the first time, in college. A graduate, though just barely, of Chaminade High School in Dayton, Ohio, nearly five decades ago, he will began taking classes next fall — in English literature, philosophy and, he hopes, oceanography — at National University of Ireland in Galway, in the country where his mother was born.

In an NBC survey on the eve of the last US presidential election, fictional President Bartlet polled more votes than Bush and Gore combined.

Yet the man who plays Bartlet is more radical still, and, over the years, has become one of the most prominent campaigners for social justice and peace.

Martin Sheen has been arrested more than 70 times at protests, on a range of issues from the rights of workers and the homeless, to the environment and defence.

His campaigning spirit stems from a deeply held Catholic faith.

He was born Ramon Estevez in 1940, in Ohio, the seventh of 10 children of a Spanish immigrant father and an Irish mother.

He so wanted to be an actor that he deliberately failed his entrance exam to the University of Dayton, so that he could attend acting school in New York.

He changed his name to Martin Sheen to avoid being typecast in ethnic roles.

And Wikipedia reports that Sheen is a believer in the Catholic-lefty Consistent Life Ethic:

The Consistent Life Ethic is an ethical, religious, and political philosophy with the basic premise that "all human life is sacred", and that this calls for "a coherent social policy which seeks to protect the rights of the weakest and most vulnerable in our society, the unborn, the infirm, the refugee, the homeless, and the poor." Advocates of the Consistent Life Ethic are consequently opposed to abortion, capital punishment, "economic injustice", assisted suicide and euthanasia, and unjust war; some who hold the Consistent Life Ethic oppose all war.