Docking with Mir in unlikely places 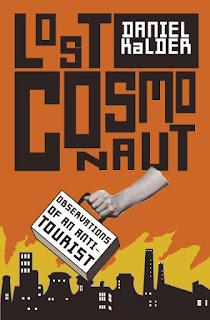 Alice (via bookslut) brought Daniel Kalder's book Lost Cosmonaut to my attention. It's a romp through the backwoods areas of the already backwoods former Soviet Union, with a great cover.
From the Guardian review:


The tone of Lost Cosmonaut is set on the first page, which consists of an extract from the Shymkent Declarations: the "resolutions passed at the first international congress of Anti-Tourists at the Shymkent Hotel, Shymkent". "As the world has become smaller," the declarations begin, "its wonders have diminished ... Consequently the true unknown frontiers lie elsewhere. In our over-explored world these must of necessity be wastelands, black holes, and grim urban blackspots: all the places which, ordinarily, people choose to avoid." Distancing himself as far as possible from the travel-writing staples of whimsical experiences and quirky locals, Kalder declares that the anti-tourist, among other things, "embraces hunger and hallucinations and shit hotels", "is interested only in hidden histories, in bad art", "scorns the bluster and bravado of the daredevil", and "holds that whatever travel does, it rarely broadens the mind."

Kalder then undertakes a haphazard tour of the empty, dreary and practically unheard of - even in Russia - republics of Tatarstan, Kalmykia, Mari El and Udmurtia. Sticking faithfully to the spirit of the declarations, he seeks out all that is dull and decaying, and embarks on a series of obscure quests. These include a search for Mikhail Kalashnikov, inventor of the AK47 and Udmurtia's most famous son, a journey to a city dedicated to chess, and an attempt to remain in his hotel room for the entirety of one leg of his journey on the basis that "I figured no travel writer had ever done it before" (in the event, he lasted about two hours). Cocking a final snook at the traditional travel-writing genre, he also fully embraces the Shymkent Declarations' final item: "The anti-tourist loves truth, but he is also partial to lies. Especially his own." Readers spend a good part of the book trying to work out which of Kalder's bizarre tales are fact, and which are elaborate flights of fancy.
...
This peripatetic period came to an end when he and Joe came across an article about Chess City, a complex dedicated entirely to chess built by Kirsan Ilumzhinov, the head of the World Chess Federation and the President of Kalmykia. "It blew our minds," Kalder explains. "Then I found out Kalmykia itself was just an empty wasteland, and I became fascinated by its nothingness. No one in Russia knew where it was: Joe spent two hours phoning travel agents, and they kept telling him it was in another country. When we did go, we had to tell people we were journalists, because they were just baffled by the idea of people coming to visit. The only way to get there was to fly in this really crappy little plane, that looked like a waiting room for death. And when we got there, physically, it was just this endless, empty land. There was nobody there; nothing. It was an absolute void, which is what we were both looking for."