Painter Ryan Hennessey will put on canvas any Nintendo screen shot you send him, for a reasonable price. I love his Mega Man 2 select screen notych (below; what else would you call a 9-canvas painting?): 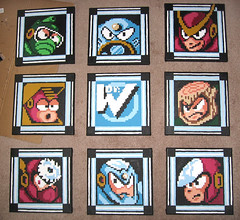 The select screen is the essential focus of Mega Man games, because of the series' nonlinear structure. There are usually 8 main stages in every game (the first had 6, and a later entry in the series had only 4), which can be played in any order. Beating each stage's boss, who lends his name to the stage, earns you a new weapon or tool based on his nature; these can then be used on other levels to exploit the weaknesses of enemies and bosses, or to access routes or areas that are usually out of reach or blocked.

Playing the levels in different orders can alter the challenge of the game and even change the type of experience each level provides; it's the prototypical video game version of Julio Cortazar's Hopscotch. (Pablo Neruda said "People who do not read Cortazar are doomed. Not to read him is a serious invisible disease." I feel the same way about Mega Man 2.)

So after learning of the Mega Man 2 paintings, I got to wondering, does one of the other Mega Man games have an even better select screen? Or should I mix and match the bosses? Only a review of all the select screens could provide the answer.

Below are the select screens of all of the Nintendo and Super Nintendo Mega Man games:

The original Mega Man, before they invented design.

By the way, you can't judge a book by its cover. It's unclear to me whether the "artist" here ever even saw the game in question being played.

Mega Man 2, perhaps the greatest video game of all time

The passable Mega Man 3, where you can see the series is about to turn a corner

Mega Man 6, the last on the old Nintendo system. Even allowing for "Yamato Man" as a failure of translation from the Japanese, it's hard to believe that "Wind Man" and "Flame Man" went unused in the previous games, which had such strong candidates for replacement as "Napalm Man". (Any number of better-sounding synonyms for "fire" would have also worked.)

Mega Man 7 ushers in the 16-bit era of Mega Man on the Super Nintendo system. Notice that the designers have given up on providing the bosses with names. Nonetheless, it starts innocently enough, with some imagination...

...and quickly disintegrates into flashy fluff. Mega Man X, an attempt to reinvent the series. In case you're wondering, playing this awful game makes you feel just like the boss on the top-right.

Mega Man Soccer brings back some old favorites, as well as some guy called "Enker". Notice how none of the bosses from Mega Mans 5, 6, 7, X, X2, or X3 seem to have gained a foothold in players' imaginations.

A giant mosaic of all the 8-bit NES Mega Man select screens. Note the use of the Mega Man 2 border and background graphics. It'll be a cold day in Heat Man stage when a fan cares enough about the Mega Man Xx bosses to bother making a mosaic of them.

Do you remember the contest Nintendo Power held to design a Mega Man boss? I thought it was during the Mega Man 3 timeframe, but apparently it was for Mega Man 6. I can't quite remember what my entry was, but needless to say it lost. (Knight Man and Wind Man were the winners.) That contest experience steeled me against the weekly disappointment I would otherwise experience upon discovering that my New Yorker cartoon catpion contest entries didn't make the cut.

I never caught the Mega Man contest. I think by that time I had allowed my subscription to lapse. Nintendo Power never had the wide-eyed wonder and nerd intensity of its predecessor, the Nintendo Fun Club News, which you received if you were a member of the Nintendo Fun Club, as my friends and I all were. When Nintendo announced the launch of Nintendo Power and added that NFCN would be closing its doors, all of us commiserated.

I remember how often Nintendo would explain to the magazine's readers that they should not send in ideas for videogames, because the risk of lawsuit from coincidentally similar ideas prevented Nintendo from considering submitted ideas at all.

They finally did do a game idea contest once, but they picked a generic Ghouls 'n' Ghosts-type sidescroller instead of my idea, which was for a pared-down RPG that had something to do with being abducted by aliens and having to negotiate your relationship with them. Will you be an emissary of peace? Will you sabotage their ship and sacrifice yourself? Will you go native, rename yourself Tanya, condemn your human publisher father, and turn to violent struggle against the human race? I still fantasize about making that game.

mega man x was bad?! seemed pretty good to me. if fact, out of the x series, the first was one of the best. x2 was ok, but just not the same, then pretty much from 3 to whatever(8 i think, excluding command mission or whatever other stuff they've made), it died.

Y'know the Mega Man 1 boss mugshots exist. Finish MM3 to see them, Rock, Roll's and Protoman's. They must be on SPRITES inc or some other fan site

I know I'm really late on this posting, but Mega Man X was totally awesome. The animal characters, albeit cheesy, allowed the designers to create a wide selection of interesting characters and battles that didn't remind any of us that at one time we were fighting "Top Man". But even with those odd characteristics of the series set aside, the gameplay was perfectly in line with the evolution of how Mega Man was always played. (Rush abilities, Sliding, Charge-up shots, etc.)

That, and you clearly haven't played them as you think that boss on the bottom of MegaMan X2 is a dragon.

the mega man x games were awesome!!! and wheel gator wasn't a dragon which also leads one to believe that the writer has never even played any of these games......

YOU shouldn't judge a book by it's cover. Obviously, you haven't played any of the X+ games.

megaman 7 bosses had names.c'mon it's like they wrote the review based on the screen shots alone. all the games are essentially the same. how can you say most of them suck

he -DID- write the review off of the screenshots, because he referenced a mega man game having only 4 boss characters; the screen shot from Mega Man 7. I'm guessing he's never tried googling the boss lists, either.

And I'm just going to re-affirm that his guy has no clue regarding the X series at all.

Enker was the next to final boss from the Gameboy game. His ability had something to do with a barrier that reflected your attacks back at you.

I have been a Mega Man even since I was a kid, and trust me sir, Mega Man X was incredible.

Did I miss "Old School" Mega Man? Of course. But Mega Man X (The first in the X series) had so many things going for it: A new villian (Sigma), FINALLY a different-ish storyline (Robots going maverick, and hunters are tracking them down), we have the introduction of Zero and Vile (In all his Boba Fett glory), and an EXCELLENT soundtrack.

The graphics for the game were also awesome. I loved the armor improvement system with the capsules and the holographic Dr. Light. And who can forget getting the hidden "Haddoken" power up?!

Sorry man, but from one fan to another, just because it isn't "old school" doesn't mean it doesn't.....

Capcom still makes Terrible covers for megaman (look at protoman on the megaman 10 cover) the best boss is flashman (megaman 2) worst boss is centaur man (Megaman 6) why didnt they do something more fearsome from greek mythology like a Minatuar!!!

You're a mega man noob. You obviosuly never played the mega man x series, and don't seem to understand the storyline differences from the original NES series and the SNES X Series. Thats why no X characters were featured in Mega Man soccer.

Cool Mosaic.
I actually did like Mega Man III as much I did II, but mostly for the upgrades (sliding, controllable Rush Jet & Marine)

On Mega Man X: X1 & X2 came out before VII (which was released alongside X3). X1's biggest complaint is that it was too short (compared to III-VI).

On Mega Man VII: People preferred the classic design better than they did the newer "X" format. VII has 8 Robot Masters, but does like Game Boy's Mega Man 4 and 5, revealing them four at a time (with a tough mini-boss battle in the middle). Burst Man (bottom), Cloud Man (left), Junk Man (right), and Freeze Man (top) are joined by Turbo Man (Dr. Wily's answer to the Stunticons), Shade Man (a robot vampire), Slash Man (Dr. Wily's answer to Wolverine), and Spring Man.

On Mega Man Soccer: This game was based on the Classic-verse, which includes the Game Boy versions. Enker is a 9th Robot Master from Mega Man in Dr. Wily's Revenge. The following four Game Boy Titles produced Quintet, Punk, Ballade, and Terra (Earth) as their 9th Robot Masters, and MM5 had the nuclear-powered Sunstar as a 10th Robot Master.

On Mega Man VI: I'm ashamed to say that I forgot to send in my robots to the NP Robot Master contest. Had I done so, I would have produced 9 entries, including a "-Woman" based on Circuit Breaker from the Transformers comic. (Rap Man was a last-minute 9th. He threw CDs.)

DUDE....if you don't get you information right you should not make articles like this. if you were a master robot you would be called "noob man" XD well idk some of the bosses in this article, and thats why i don't right about them. my faviroite master robot is quick man, if that intrests anyone...well i don't say all other robot masters stink, as you said all the robot masters you hated stunk. cruil.

i happen to love all the mega man games out there that follow the original game-play (action shooter) because you can't find a game like this that's good! i don't care what the bosses are named or give you but you failed to mention 9/10 for wii ware which brought back nostalgia from the old 8-bit days. overall mega man platformers are fun in general and i suggest playing megamanX series and the megaman series for nes/snes/wiiware. also, whoever wrote this has never played any mega man at all

Mega Man X = The best MM game on SNES!
For me, X2 and X3 disintigrated into their added unnecessary gimmicks and lackluster design. MM7 is okay, but left me feeling that something was lacking.